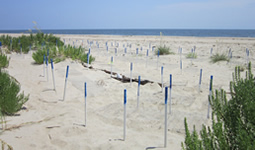 Our national wildlife refuges are dedicated to preserving the diversity of species that makes our world and our lives rich and interesting. With your generosity we are proudly supporting their efforts. For ten years the Association has been supporting loggerhead sea turtle recovery efforts on Cape Romain National Wildlife Refuge by funding field technician positions during the nesting season, supporting predator control efforts and providing needed supplies and materials.

During the 50 plus days of incubation turtle eggs are vulnerable to predators (like raccoons) and, because of beach erosion, to being washed over by high tides. So sea turtle conservation must begin with protecting nests.  On Cape Romain this effort is nothing short of heroic. From late April to late August over 80 volunteers donate over 6,000 hours to the refuge’s nest protection and monitoring efforts. They are led by two full time field technicians and Cape Romain’s biologist. Seven days a week the work begins at dawn before most of us have even hit the snooze button for the first time. Crews work tirelessly to ensure every nest on the refuge has the best possible chance of producing hatchlings.

The nests that are being protected today are producing the turtles that will return as breeding adults in 30 to 35 years. Because turtles mature so slowly, assessing population trends is a long term commitment. Loggerhead sea turtles were initially protected in 1978 and the efforts since that time seem to be paying off. Nesting numbers have steadily increased at Cape Romain over the last several years, peaking at a record 1,906 nests in 2013.  Florida, Georgia and North Carolina are also reported record high numbers of nests.