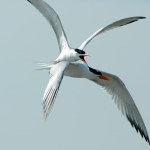 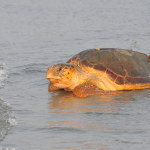 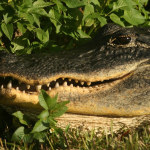 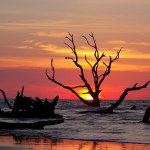 Have you visited Bulls Island?

This undeveloped barrier island at the south end of the refuge is teeming with bird life and is one of the best places we know of to see American alligators. An unprecedented number of ecosystems (salt marsh, maritime forest, freshwater wetland, and beach) are found within just a few miles on this beautiful island.  Accessible only by boat;  Coastal Expeditions runs regular ferry service to the island.

We manage and fund all aspects of the environmental education programs on the refuge and at the Sewee Visitor and Environmental Education Center.

In 2008 we worked with the refuge to obtain a $300,000 multi-year grant to fund environmental education, sea turtle and shorebird conservation work and invasive species eradication efforts on the refuge.

We continue to provide ongoing support for sea turtle and shorebird conservation efforts as well as the red wolf reintroduction program.

In 2006 we obtained a grant from the Spaulding-Paolozzi Foundation that allowed us to install new audio-visual equipment and theater lighting in the Sewee Center auditorium and upgrade the audiovisual equipment in the classroom.

We have done much to enhance visitors’ experience at the refuge, including facilitating construction of the Dave Clough Memorial Platform on Bulls Island.  The observation blind gives visitors an incredible opportunity to see deep into Upper Summerhouse Pond.  We have also assisted with many interpretive displays on the refuge.

Cape Romain was established in 1932 as a migratory bird refuge.  Although the refuge spans only 22 miles of our coast it is some of the most critical habitat along the southeast Atlantic coast for loggerhead sea turtles and countless species of shorebirds.   The refuge consists of 66,287 acres that include barrier islands, salt marshes, intricate coastal waterways, long sandy beaches, fresh and brackish water impoundments, and maritime forest.  Over 29,000 acres of the refuge are designated as Class 1 Wilderness.  Bulls Island and Lighthouse Island (where two historic lighthouses still stand) are significant historic and recreational areas. The refuge’s original objectives were to conserve in public ownership habitat for waterfowl, shorebirds, and other species. In recent years, objectives have expanded to include: managing endangered species, protecting the 29,000-acre Class 1 Wilderness Area, and conserving the Bulls Island and Cape Island forests and associated diverse plant communities. Aiding the recovery of the threatened loggerhead sea turtle is one of the refuge’s highest priorities.   The refuge is also part of the red wolf reintroduction program, serving as a captive breeding facility and housing four of the last remaining 400 red wolves in the world. Learn More.